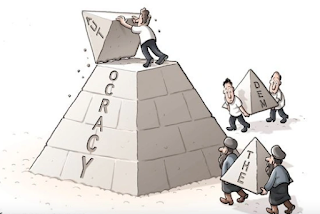 The bemoan autocracies in Latin America, the Middle East, Africa, Russia and China but largely ignore the more subtle authoritarian trend in the West. Don’t expect a crudely effective dictatorship out of Orwell’s Nineteen Eighty-Four: we may remain, as we are now, nominally democratic, but be ruled by a technocratic class empowered by greater powers of surveillance than those enjoyed by even the nosiest of dictatorships.Full article in The Spectator.
Posted by : at 15:49 No comments: